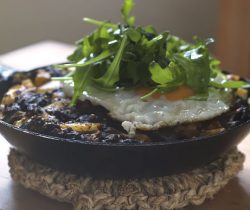 This black pudding hash  is perfect for once the nights are getting dark and you are about to brave a cold day.  We found this recipe in the telegraph by Rose Prince and the photo is by Laura Hynd.  You can buy our award winning black pudding here

Remove the black pudding from its skin and mash with a fork.

Put in a bowl.

Boil the potatoes whole until just tender when pierced with a knife (they should not be mushy).

Leave to cool, then cut into 1cm dice. Meanwhile, add the other hash ingredients (except the butter) and a teaspoon of freshly ground black pepper to the black pudding.

Add the potatoes and stir to a lumpy hash – do not over-mix.

Heat the butter in an 18cm non-stick pan.

Spoon in the hash mixture and spread it out evenly over the base.

Cook over a low-medium heat for eight to 10 minutes – the hash should be brown and crisp underneath if you lift it with a spatula. Either put it under a low grill to cook the surface, or place a dinner plate over the top of the pan, invert it so the hash is on the plate, then slide the hash back into the pan to cook the other side – again for about 10 minutes.

Fry an egg or two for each person and serve on a slice of hot hash with a pinch of paprika, some rocket, chopped black olives, a pinch of black sesame seeds and a few drops of olive oil.