Its British Pie Week (6th-12th March) and we have been hunting down some fabulous pie recipe including black pudding.  Now we here at Real Lancashire Black Puddings know that Guinness goes great with Black Pudding as we have won a few award for a Guinness and raisin black pudding.  We found this amazing recipe for a steak, black pudding and Guinness pie by the Kitchen Alchemist . 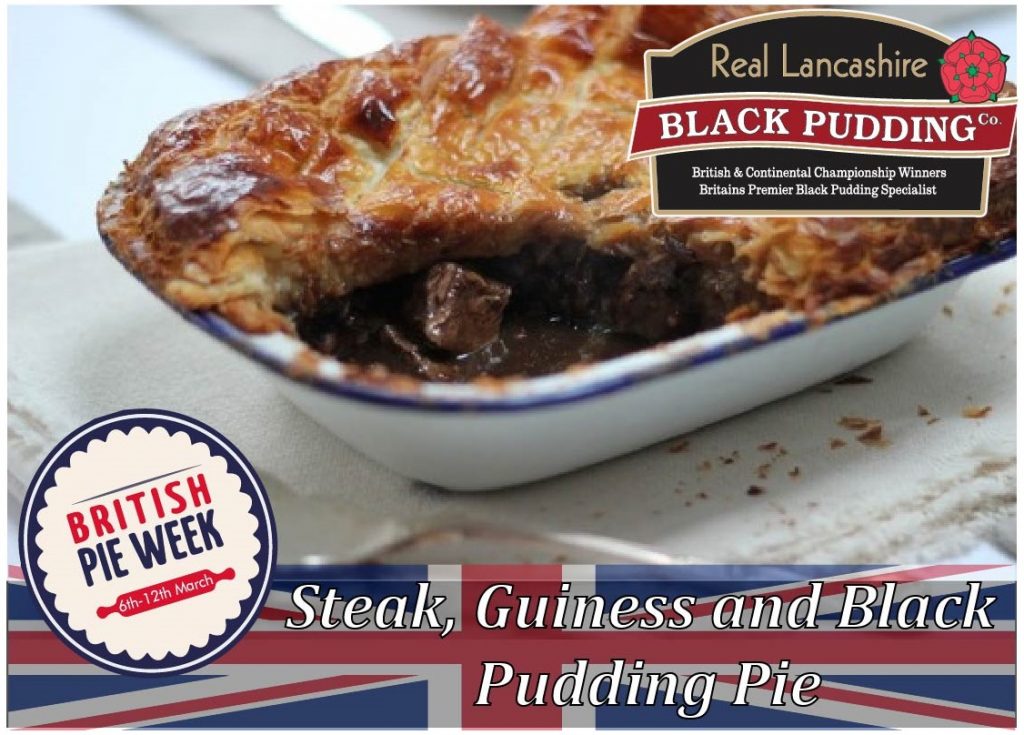 Method
1.Remove one of the pastry rolls from the fridge.
2.Into a slow cooker place the beef, Guinness, carrots, onion, celery, bay, sugar, Worcester sauce and a generous grind of pepper, cook on a medium heat for around 3 hours – or until the meat is tender and you can break the chunks with a spoon.
3.Once the pie contents has been on for an hour, take your pie dish and roll out one of the sheets of puff pastry until it’s about the thickness of a £1 coin. Drape it into the dish and using your knuckles gently let it sink into the edges (you don’t want it to tear) leave some pastry hanging over the edge of the edge of the pie dish because it will shrink when cooked, and then place it into the fridge for a couple of hours.
4.Strain the slow cooker contents through a colander once ready, catching the liquor – put the liquor on the hob on a medium heat and bring to the simmer for around 10 minutes, add several scrunches of sea salt to taste, but you’ll be surprised at how much it needs.
5.Whilst this is happening, remove the onions and bay leaves from the colander and discard.
6.Preheat your oven to 200°C and take the other pastry roll out of the fridge.
7.Gradually pour the cornflour mix into the liquor on the hob and stir thoroughly, do this gradually until you’re happy with the thickness of the liquor, but you shouldn’t need more than the three tablespoons you’ve made up.
8.Cook the liquor for around 5 minutes then add the steak, carrots, celery and diced black pudding to the pan, turn off the heat and leave there to settle.
9.Take the pie dish from the fridge and put some baking paper in it, weighed down with baking beads or dry rice, then bake for 10 minutes.
10.Remove from the oven and using some kitchen scissors or a very sharp knife, slice the excess pastry off that is now hanging below the edge of the pie dish.
11.Take the baking beads / rice and baking paper out of the centre of the dish and put the dish back into the oven for 4 minutes.
12.Remove from the oven (and don’t be scared, I know it all looks puffed up) leave it a couple of minutes to settle a little, then carefully using the back of a wooden spoon, press the base of the dish back down.
13.Carefully ladle the pie contents into the dish now, filling it to about 2cm below the top.
14.Take your pastry and roll it to around the thickness of a £1 coin, baste the pastry edges of the dish that has been cooked with the whisked egg, and then drape the rolled out pastry over the top, gently press the edges down with your fingers so they’re firmly connected, and using a sharp knife remove the excess pastry. Now carefully score a cross pattern over the pastry, being careful not to peirce it, before cutting a hole in the centre for the steam to escape, and brushing it with the beaten egg mix.
15.Pop it into the oven for around 40 minutes, until the pastry is a deep golden brown and when you spear the centre, the knife comes out hot hot hot.
16.Serve with your vegetable of choice.