The Great Taste awards is the UK’s most renowned food awards, who celebrate the very best in food and drink, has announced the Great Taste stars of 2017. Out of over 12,300 products, The Real Lancashire Black Pudding Company was awarded a 2-star Great Taste award, which means judges dubbed it outstanding  for its Smoked bacon & Leek black pudding, which judges stated was ‘Very good and very moreish!’

Judged by over 500 of the most demanding palates, belonging to food critics, chefs, cooks, restaurateurs and producers, as well as a whole host of food writers and journalists, Great Taste is widely acknowledged as the most respected food accreditation scheme for artisan and speciality food producers. As well as a badge of honour, the unmistakeable black and gold Great Taste label is a signpost to a wonderful tasting product, which has been discovered through hours and hours of blind-tasting by hundreds of judges.

The smoked bacon and leek black pudding was developed in ‘The little kitchen’ a smaller factory built within the heart of the pudding mill, where Andrew Holt, MD of Real Lancashire Black Puddings dedicates time and attention to creating specialist products using the knowledge he has gained over the past 23 years. Andy stated  ‘it’s really taken off, we knew the Bacon and leek black pudding was tasty and our customers love it  and this award has confirmed it.  We were really happy to get this outstanding result at the Great Taste Awards’ The Real Lancashire Black Pudding company has won over 190 awards for the products in its core range, developed the ‘World First Vegan Black Pudding’ and was the first to produce ‘The Chilli Black Pudding’.

Its also not the first award this product has won.  In 2016 the Smoked Bacon and Leek Black Pudding won the best black pudding in category at the National Meat Products Awards.  The competition which is entered by butchers all over the nation has some 20+ categories and is highly recognised within the meat trade industry. 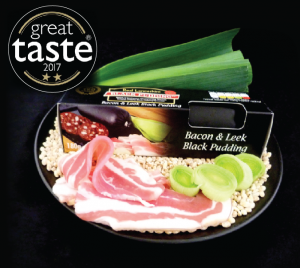