What is White Pudding?

We often say the main thing a White Pudding and a Black Pudding have in common is the word ‘Pudding’.

Its a common misconception and we have often found people are reluctant to try white pudding due to that word. Previously at shows and farmers markets we have described it as a cooked sausage and found people are more likely to try and buy.

The White Pudding has a high meat content and the rest is made up with cereal, herbs and spices. Our Traditional Irish White Pudding recipe has a smooth Creamy texture, with a peppery after taste, people often say it reminds them of the flavour of a high quality stuffing.

However there is only one way to find out….Give it a go 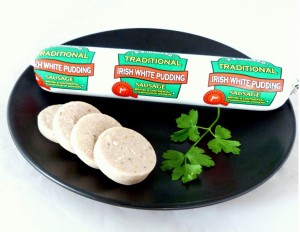